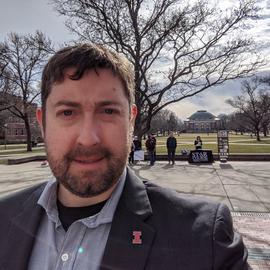 University of Illinois at Urbana-Champaign

Prof. Nesbitt is the Associate Head and Director of Graduate Studies in the Department of Atmospheric Sciances. Hleads a research group comprised of research staff, graduate students and undergraduate researchers, where his research and teaching interests reside in atmospheric observations including the remote sensing of precipitation using radar and passive microwave sensors, observations and modeling of mesoscale and cloud dynamics and microphysics, land-atmosphere interaction, as well as data science and high-performance computation. He has participated in and led numerous field campaigns spanning four continents using radar, aircraft, and in situ instrumentation. He has taught courses in synoptic and mesoscale meteorology and weather forecasting, remote sensing, radar meteorology, tropical meteorology, mesoscale modeling, and geophysical data analysis and python programming.

Department of Atmospheric Sciences, University of Illinois at Urbana-Champaign

I believe that Diversity, Equity, and Inclusion is a key scientific ethics issue of the early 21st Century. My research group values a commitment to respect. As we face the challenge of making geosciences more welcoming and accessible to all groups, I have undertaken the following actions to add to a more inclusive community of scientists:

Some of the most fundamental and complex research problems in climate and weather center around our poor understanding of basic properties of clouds and precipitation and our inability to determine quantitatively the many effects cloud and precipitation processes have on weather and climate. Estimates from current climate models indicate that Earth’s average surface temperature will warm from 1.5 to 4°C by 2100 due to increases in greenhouse gases. Most of the uncertainty in this estimate is attributed to uncertain treatments of clouds and precipitation in climate models, and reducing large uncertainties in projecting local- to regionalscale climate change impacts relies on improving our knowledge of cloud and precipitation processes and their representation in models. I have led and participated in large new international projects at the forefront of our field designed to make fundamental advances in understanding of clouds and precipitation processes, this important component of the climate system. In the future, my goal is to continue to contribute important advances in this area as the complex challenges that involve flows of water and energy through the earth system.

I have developed complimentary research programs under the overarching theme of clouds’ and precipitation’s impacts on climate and weather, addressing some of the most pressing issues in weather and climate research. My specific research thrusts have (1) improved our understanding of the characteristics and physics of clouds and precipitation as part of the earth system, (2) quantified the spatiotemporal variability of precipitating clouds and their dynamical impacts as a function of environmental forcing, and (3) provided understanding of how precipitation processes and cloud systems impact climate variability. I led the largest landbased field campaign effort ever conducted outside of the United States in the atmospheric sciences in South America (RELAMPAGO-CACTI) to study what research portrays as some of the “world’s most intense thunderstorms”, and in addition, I have either led or participated in a series of major multi-agency field campaigns, such as MC3E, GCPEx, IPHEX, OLYMPEX, and CAMP2EX all related to NASA satellite missions, the Tropical Rainfall Measurement Mission (TRMM) and the Global Precipitation Measurement (GPM) mission, and NASA’s Aqua, Terra, and CloudSat-Calipso missions.

One focus area of my research has been on improving knowledge on the representation of ice clouds, which produce the majority of earth’s precipitation, yet are the most difficult to simulate and observe due to their complex microphysical nature. My work has focused on making breakthroughs in improving the characterization of ice clouds and reducing uncertainties in satellite measurements of their properties using data collected in complex multi-platform field campaigns (including aircraft, ground-based radars, and satellite measurements). My research group has been at the forefront of retrieval algorithm development for GPM’s radar, and the use of multi-frequency ground, aircraft, and spaceborne radar for precipitation studies. We demonstrated that aggregate, low density snowflakes produce distinct microwave scattering signatures compared to higher density rimed particles using radar reflectivity measurements that can only be acquired with a three-frequency radar system. We have published several articles examining the microphysics of ice clouds with in situ measurements, recently culminating in a novel neural network based retrieval of snowfall using GPM’s radar.

In collaboration with students and numerous colleagues, I have published key papers that have advanced our understanding of mesoscale processes and convection (studies of phenomena with scales including individual clouds to storm systems), critical for improving representation of these processes in models. In a series of 4 papers, we published work which together improved our understanding of the roles of convective processes within the inner core of tropical cyclones during rapid intensification, a theory for the regulation of tornado intensity by the parent mesoscyclone updraft width, and testing that theory with observaions, examing the dynamics of small scale vortices (on horizontal scales of ~10 km) in lake effect snow bands over the Great Lakes, and employing a novel technique to observe cold pool structure using radar data and high density surface mesonet data collected during MC3E.

My research group currently is deeply involved in several large observational field campaigns. I conceived and led a large international and interdisciplinary field campaign 2018-2019 called RELAMPAGO (Remote sensing of Electrification, Lightning, And Mesoscale/microscale Processes with Adaptive Ground Observations)-CACTI (Clouds Aerosol Complex Terrain Interactions), funded by the NSF, NASA, NOAA, DOE and other agencies in Argentina and Brazil. This transformative $25+ million project developed from two large scientific overview and experimental design documents submitted to the NSF from a science team that I led. As part of this project, I lead a group of 20 principal investigators, and coordinated the plans for the experimental design, instrumentation deployments, and field operations and logistics. In the future, I hope to solidify leadership in atmospheric observations, including the ongoing establishment and development of instrumentation deployments. I have been involved in several projects to enhance diversity and inclusion within these campaigns. I co-led efforts to ensure a harassment-free and inclusive environment for participation and interactions in the campaign.

Throughout my research career, I have maintained close relationships with programs across the weather, climate, and radiation programs at NASA, participated in the 2020 NASA Earth Sciences Directorate Senior Review, and am poised to participate and be involved in future high-priority NASA Decadal Survey missions, particularly since missions studying clouds and precipitation were recently classified as a Tier 1 priority within the Survey report. I serve an official capacity at NASA as a member of several Scientific Advisory Groups of the upcoming Atmosphere Observing Mission (AOS), which is a select steering group for this future mission in its planning stages. I have also been a strong leader in using and proponent of developing open-source programming in remote sensing science, working to enhance existing initiatives and developing new activities on campus in this area. Each of these activities together will be key for driving our nation’s scientific and discovery infrastructure over the coming decades. I also have interest in SmallSat and CubeSat technology. CubeSats, with new miniaturized passive and active sensors, will be an important part of the future of earth observation, alongside the traditional large satellite missions. I aim to leverage this technology, as well as new models and computing infrastructure, for better understanding of the earth system as well as to help society be prepared for hazards and be resilient to changes in climate.

The Department of Atmospheric Sciences has the following platforms available for research projects:

In 2020, the DOW Facility joined the Department of Atmospheric Sciences at the University of Illinois. This facility operates